30th anniversary of the KunstHausWien 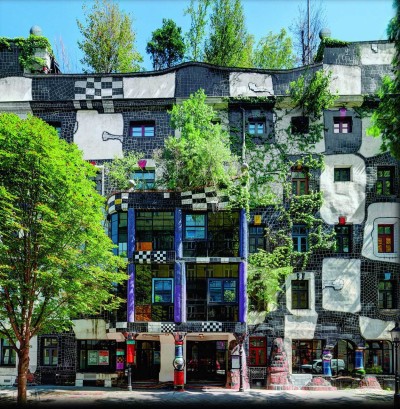 The KunstHausWien owes its existence to the initiative of Hundertwasser’s manager and companion of the road, Joram Harel. He found suitable premises for a permanent exhibition of Hundertwasser’s works in the third district of Vienna, the building of the former furniture factory of the Thonet Brothers, built in 1892.
The reconstruction according to Hundertwasser’s concept was carried out from 1989 to 1991, implementing the artist’s principles of a more human architecture in harmony with nature, irregularity and variety of shapes, the uneven floor, the afforested roof and vertical greening by tree tenants.
On April 9, 1991 the KunstHausWien was officially opened. Hundertwasser notes in his text “The Role of the KunstHausWien”:
Art must respect nature and the laws of nature.
Art must respect man and man's aspiration for true and durable values.
Art must again be a bridge between the creativity of nature and the creativity of man.
The KunstHausWien houses the Hundertwasser museum, the world’s biggest collection of the artist’s works, and displays them in a permanent exhibition spanning two floors. Key paintings are on display as well as original graphics, tapestries, stamps, flags, architectural models, and testimonies of his ecological commitment.
Since its establishment, the KunstHausWien has been presenting various temporary museum exhibitions on the upper two levels.
Since 2008, the KunstHausWien has been one of four Wien Holding museums and presents photo exhibitions that deal with topics such as sustainability, climate change, recycling and urbanism.
https://www.kunsthauswien.com/de/